Touch Eldoret is a small Christian charity based in Truro, Cornwall, and has a vision to touch the lives of the people of Eldoret in Kenya, East Africa.

Eldoret is the fifth largest town in Kenya. Situated 165 miles North West of the capital city of Nairobi and 493 miles from Mombasa, the main coastal city. It is 6,800 feet above sea level, and has the benefit of great beauty and cooler temperatures, in spite of being so near the equator.

We support people in Uasin Gishu which is on the outskirts of Eldoret.  It is an area of Kenya in need of much additional support, where many of the population lack access to clean water, education and food.  They mostly live hand to mouth, surviving by working small plots of land to grow crops to feed themselves and their families. 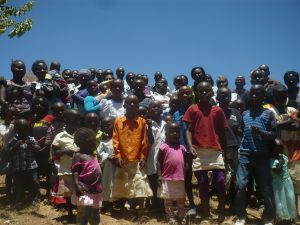 Education and access to healthcare are often limited. Droughts can last months at a time, causing illness and crop failure. When the rains do come, many have no facilities to store water and continue to suffer. We hope to relieve the poverty of these people by providing financial and practical support as well as access to training, healthcare and education. In time, this will enable the people of Eldoret to generate a sustainable income and become self sufficient.

Jane first visited Kenya in 2007 and wanted to find a way to help the people there. Touch Eldoret has grown out of her passion to bring hope to people who lack so much.

Touch Eldoret is run by a board of Trustees:

During her career as an Occupational therapist and Lymphoedema therapist, Jane with the support of a board of trustees raised funds for equipment for cancer and palliative care patients at the local hospital. Since retiring she has dedicated her time to the people of Eldoret, Kenya, after first visiting in 2007. She has since run Healthcare clinics in Nakuru and continues to actively fundraise for the Charity from the UK. Jane also runs an activity and support group for sufferers of Lymphoedema and Lipoedema.

Having spent several years volunteering in Ethiopia and working alongside agricultural charities in Kenya, Jason is now Construction Director for a Renewable Energy company in Cornwall. Jason has been actively involved in the running of Touch Eldoret for several years.

Touch Eldoret is a Registered Charity